20 Of The Most Scenic Bike Trails In The US

The 7.5-mile, paved Old Colony Rail Trail runs from Harwich to Chatham. You will pass the Chatham Lighthouse and Oyster Pond Beach. You have to mingle with automobile traffic on several areas on this trail, and there are a few small hills.

The eight-mile, flat, concrete Cape Cod Canal Bike Path runs through Bourne and Sagamore. It has a center yellow line to set up two-way traffic. You may see boats on the canal. There are benches along the trail, picnic tables at the Bourne Recreational Area, and view of the Bourne Bridge from underneath. You can also view the Cape Cod Canal Railroad Bridge. It is 135 feet above the water and is one of the longest lift bridges in the United States.

The 10-mile, flat, asphalt Shining Sea Bikeway is a rail trail that runs from the Woods Hole Ferry Terminal to North Farmouth following the Vineyard Sound coastline. It passes by cranberry bogs, the Sippeswissett Marsh, the Trunk River Beach, the Chapaquoit Beach, and the Salt Ponds Area Bird Sanctuary.

The 185-mile, car-free, crushed limestone GAP Trail and C&O Canal Towpath passes the Youghiogheny River, the Salisbury Viaduct, the Ohiopyle State Park, the Laurel Highlands, the Western Maryland Scenic Railroad, Frank Lloyd Wright’s Falling Water, and the Hillman Truss Bridge, a cast-iron truss bridge. There is only one other cast-iron truss bridge in the United States. The GAP section heading west has a 1,800 vertical foot climb with a 1.4 percent average grade. Hybrid or mountain trail bikes are best for this trail. It offers numerous grassy camping areas with water, picnic tables, and restrooms.

The 14.5-mile. asphalt Shark Valley Trail is part of Everglades National Park. Any type of bike is suitable for this trail. Winter is the best to time to visit this area, and be sure to visit the observation tower at the south end of the trail.

The 32-mile, crushed limestone Elroy-Sparta Trail, built in 1967, was the first rails-to-trails bike trail in the United States. This trail is one of over 80 Wisconsin bike trails. It is part of the connected Bike 4 Trails that includes the 22-mile 400 Trail, the 22-mile La Crosse River Trail, and the 24-mile Great River Trail. The Elroy-Sparta Trail features three 19th century railroad tunnels constructed of rocks that are one-quarter to three-quarter miles long.

The 52-mile Glacial Drumlin State Trail runs from Cottage Grove to the Fox River Sanctuary in Waukesha and offers connections to Madison and Milwaukee. It passes through glacial topography that includes wetlands, ponds, rivers, and small hills called Drumlins.

The 8.6-mile Glacial River Trail runs from Fort Atkinson to the Jefferson/Rock County line. The northern half of the trail is asphalt. The other half is crushed limestone. Under the Rock River bridge is the River Walk with shops and restaurants. In places the trail uses the roadway, and at one point the rail trail joins Old 26 Road. Turn right on Old 26, and go southwest for a mile to visit Indian Mounds Park. There you will find an old Indian trail and 11 turtle-shaped and bird-shaped 1,500 year old Indian mounds. In Rock Counry, the trail runs through a covered bridge. In Janesville, you can connect with other trails.

The three-mile Camrock 3 trail may sound too short for consideration. However, it starts with an uphill climb and then splits into and loops intermediate-level loop to the left and an expert loop that goes straight. The expert loop contains steep, technical, up and down hills, jumps, swirling switchbacks, a cliff edge with a 30 foot drop, and other obstacles followed by a steep descent. The intermediate loop features a fun, fast downhill from the park. 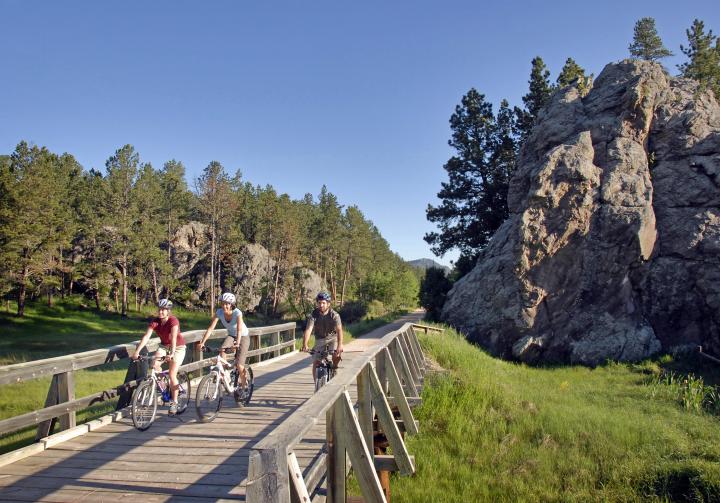 The 109-mile George S. Mickelson Trail runs from Deadwood to Edgemont, nearly the length of the Black Hills. It has a 1,600 foot climb at the start with a four percent grade. On this trail, you will pass prairies, rocky canyons, and rugged mountain terrain, 100 converted railroad bridges, and four tunnels. Landmarks include Mt Rushmore, the Crazy Horse Memorial, and Deadwood where Wild Bill Hickok was killed. Watch out for rattlesnakes, and don’t expect cell service. For this trail choose mountain or hybrid bikes.

The 238-mile, car-free, crushed limestone, Rails-to-Trails Katy Trail runs across Missouri from Clinton to St. Charles. It is the longest Rails-to-Trails trail and runs along the Missouri River below river bluffs passing through restored prairies. The Katy Trail overlaps part of the Lewis and Clark National Historic Trail.

The 10-mile Terry Hershey Park Hike & Bike Trail runs east to west along the Buffalo Bayou from Barker Dam to Texas Beltway 8. It is one of many Houston bike trails and has an expert section for experienced bikers only. At the west end, you can proceed to the 11-mile George Bush Park Trail.

An important feature of the Jack Brooks Park Trail is that it is one way. You can speed along stretches without worrying about head-on crashes. It has friendly, challenging hills, smooth drops, and an expert section for experienced riders only.

16. Trail of the Coeur d’Alenes, Idaho

The 72-mile asphalt Trail of the Coeur d’Alenes runs from Mullan to Plummer. It passes the Chain Lakes, Lake Coeur d’Alene, the Chatcolet Bridge, old Silver Valley silver mines, Heyburn State Park, the Palouse prairie, and 19th century boom towns. You can continue on the path to Spokane, Washington.

Consistently voted one of the best Denver bike trails, the 14-mile Buffalo Creek Trail requires some effort in the climbs, but the rewards of great downhills on mostly singletrack is worth it. It has hairpin turns, smooth rollercoasters, and slick rock sections. For a challenge, try the 23.6-mile International Mountain Bicycling Association (IMBA) Epic Buffalo Creek Big Loop. IMBA Epic Trails must be 20 miles or more, at least 80 percent singletrack, and a “true backcountry experience.”

The 8.1-mile singletrack Apex Park Trail Loop has an important restriction. Because of use by other groups, you can only enjoy the wonderful descents on even numbered days. The trail starts with a rocky climb for the first 1.6 miles. Overall, you climb 1,700 feet in the first five miles. Go to the right, and you have switchbacks on the way down. On the left is the Enchanted Forest Trail with an exhilarating three mile descent. Morning is the best time of day for this trail.

The 14-mile Flume Trail is for intermediate riders. It has a 1000-foot climb over four miles. After that, it becomes a flat, sand trail with great views of Lake Tahoe. However, it is along cliff edges in some areas. Advanced riders can continue the adventure on the 40 mile Tahoe Rim Trail Ride. These are mountain bike trails.

The 32-mile, two-lane, paved American River Bike Trail, or Jedediah Smith Memorial Trail, runs from Discovery Park in Old Sacramento to Folsom Lake’s southwestern banks at Beal’s Point. It is one of the longest paved trails in the country, and is also used as a commuter trail. It connects to the Sacramento Northern Bikeway north of Del Paso Boulevard near Azteca Stadium. Two miles of the trail is in the roadway.

We hope you enjoy these mountain bike trails. They are among the best biking trails in the country.

Mountain Biking Trails Scenic Bike Trails 2017-02-16
Janice Friedman
Previous: Giant Glory Advanced 2018 Mountain Bike: Is This an Elite Bike?
Next: Everything You Should Know About the Mongoose Mountain Bike